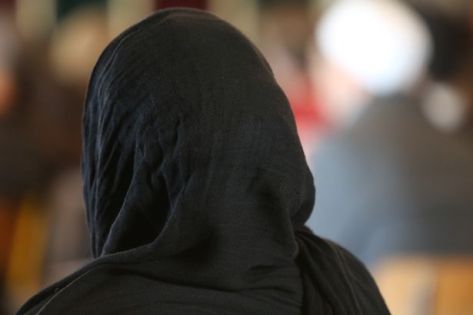 Mahira always used to wear a black, plain veil; even at her workplace. Nobody ever asked her to not to wear it.

She was from Kashmir and had recently shifted to Chennai for her work. But she didn’t shift alone; her husband- what he seemed to, at least, people around- did too. Nobody ever saw Mahira without Saif or Saif without Mahira. Both were the employees of the same company, both worked in the same department, both were seen holding hands while walking outside the company’s premises, both never ate without each other- what other reasons did anybody need to not to picture them as a couple. But yes, nobody knew for sure if they were a married couple.

Though, if the place from where Mahira hailed was considered, it wasn’t much of a modern society- sending a girl to the other part of the country alone would never have occurred in a family’s mind unless, of course, they had tied their daughter’s knot with ‘The’ husband.

Mahira, a woman with frail body-frame, was a few inches shorter than Saif, a tall handsome man. How did Mahira look like?- her veil never let anybody see. Another element that made people around conjecture over the idea of them being married was the fact of Mahira’s face was always behind that veil and Saif’s head always under a cream, round cap- taqiyah. Two Muslims- always together- quite an ideal situation of being married.

In not so huge a company, they being only a couple of its kind, it didn’t take much time before people started whispering around. Who says that people in IT companies have no time to gossip, and work is what they are always talking about? Next time when you are in one of those (IT companies) try to eavesdrop a conversation or two and you will realize it is about everything except work.

“Did you see how that man always grabs her hand and drags her?” A woman in the company said when Mahira and Saif passed that corridor.

“Oh yes!” The other one standing beside her nodded. “I saw them yesterday in the evening. Poor woman was literally running after the man to catch up with his long strides.”

And the murmurs continued even when both- Mahira and Saif- were long gone from that corridor.

When Mahira and Saif reached the canteen for their lunch, Mahira sat down on a chair and Saif went to order their lunch. Having seated comfortably, Mahira was adjusting her veil which had shifted a bit to her right-side. Saif was in the queue and just when he turned around he saw a boy approaching Mahira; he left the queue and took his usual long strides to reach Mahira before that guy could. “What happened, Saif? Where is the food?” questioned Mahira.

“I forgot what you asked me to order.” He leaned over and said in gruff voice; his eyes still lingering over that boy who he thought was coming towards Mahira. (That boy was coming in Mahira’s direction but not to Mahira; instead to the table adjacent to hers.)

When we think nobody is watching us, we act in our most honest ways; but unfortunately there always is someone who is observing our actions.
Call it a coincidence or luck but both the ladies who were pitying Mahira a few moments ago were sitting right behind the table where Mahira was and maybe nobody else had but they had seen the whole episode.

“Banana smoothie.” She said keeping her hand on his; unaware of the real reason why he was there. He didn’t even realize that Mahira’s hand was over his and probably that is why he instead of caressing her hand, went back to the queue without even acknowledging it.

So, yes, again, both the ladies- the godmothers of Mahira- started on how rude this man was to the woman.

Mahira and Saif had lunch, finished their work, and walked to their home, which was nearby to their office. Saif turned on the lights of their small 1-bhk apartment. The family portrait of Mahira’s family: her mom, dad, two beautiful sisters and she herself glowing in a pretty pink salwar-suit was the first thing one would encounter on entering in their home.

The noon’s episode had some peculiar tinge within it. Saif was uneasy since noon and Mahira couldn’t crack him open until evening. She went to their bedroom and removed her veil, and looked into the mirror. Looking into mirror wasn’t the best part of her day; she, in fact, refrained from looking at it too often because a look at herself made her relive that horrible night, again.
Now, when she was looking at herself-that swollen face, burn-marks on neck, scars under the left eye, stitched upper lip- she lost the count of time.

Saif, on the other hand, who already was disdained of his noon’s behavior was too much into himself to have noticed Mahira; he had feared that that boy would bare Mahira’s face. He felt guilty of his thoughts and guiltier on the way he acted thereafter.

Good twenty-thirty minutes had passed when neither of them took notice of the other. It was Saif who caught Mahira in between her naked moment; he found her sobbing silently looking at herself in mirror.

“Mahira!” He exclaimed and pulled her to himself. “What happened?”

She cried more. He hugged her and both sat on the bed.

“Mahira, please stop. Listen to me. It’s alright. Please stop crying.” Saif’s own voice had become feeble to an extent that it’d not be stunner if he also started crying. His eyes had already become teary, but he couldn’t become weak. He couldn’t.

After half an hour or so, Mahira calmed down and looked at Saif, whose eyes were clouded with worries.

Saif cupped her face, pressed it on his chest and caressed her hairs. “Because five years back when my house caught fire, and I was asleep inside unaware of the disaster, it was you who got yourself burnt to save me. Not my friends who were screaming around for help, not my neighbors who were freaking out by dialing Ambulance’s call. And above all- back in high school, did we not promise to love each other no matter what?”
He took a deep sigh and seeing no smile on Mahira’s face he continued, “In fact it should be I asking you why you married such an irresponsible and dull brain like Saif? He is such a lucky lad. I envy him.” Saying this he winked at her and tickled her. Mahira, a twenty-five years old, giggled like a toddler, and Saif’s heart broke a little on realizing that it always was his tickling that made her laugh, not his words.

Next day arrived and so did Mahira and Saif in office. God always made sure to make those two ‘sympathizing’ women encounter Mahira and Saif. The women gave Saif a scornful look, which he was clueless of.

“What a pitiful woman she must be!” sighed one of them looking at Mahira.