Some novels are long, too long for their content, too much of the story revolves around what doesn’t matter to anybody or anything in the story, but “A Fine Balance“, of 600 plus pages by Rohinton Mistry, is one of the rare novels that, by the end, makes you realize not a single page is inconsequential; even the characters, which, at first, might seem trivial turn out to be crucial to our story. And whenever I encounter such work, I cannot feel anything but just admiration for the author. 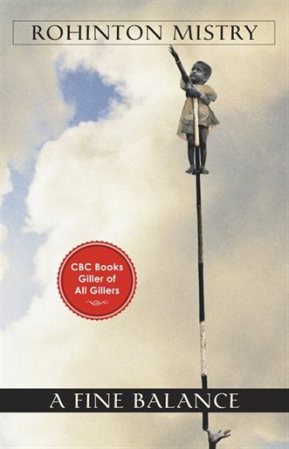 This novel isn’t only about maintaining a fine balance between hope and despair, but is an epitome of maintaining one between all the ingredients of a story that will leave an everlasting impact on its readers. This should come to you with no surprise if you have read Rohinton’s other novels. But if you haven’t, just to let you know, he has proved himself a stunning storyteller as well as an elite writer in all his works.

Yet, A Fine Balance is, by far, his best work.

When you come across a novel (a literary fiction), the least you expect of it is the range and intensity of emotions it will take you through. With Rohinton as your lead, feel safe on that part. This book is so much more than emotions. It’s about an India that we, millennials, were lucky enough to never witness.

Unlike his other two novels, AFB is a historical fiction. And what a darling it is!
With book set in the period of Indira Gandhi as India’s Prime Minister, the major part of the book deals with the atrocities that Ishavar and Omprakash had to undergo and the unfair destiny that they to lead with, because of being born in a lower-caste, Chamaar, family. What horror the poor and lower-caste people must have had gone through during the “Beautification” period of 1970s, the book provides, if not the exact, its somewhat closer depiction.

Maneck and Dina, the other 2 main characters belong to Parsee communities and were therefore granted the relief of not undergoing the oppression that Ishvar and Omprakash had to undergo, but they had their own struggles and shortcomings to fight. Be they poor or rich, everybody have their demons to fight against, do they not?

As I’m already in the zone of characters, the characterization done by Rohinton is so strong that I certainly will never forget these characters, especially of Ishvar and Omprakash. We observe the characters growing at their pace; neither too soon nor too gradual. The growth of Dina is remarkable.
Every character of AFB had something to teach and something to warn against. These characters were the soul of the story. If they had not been created with as much passion and conviction, I doubt the book would have touched as many heights in the literary circles and in general audience as it has.

Just like Jhumpa Lahiri, Rohinton also touches on the conversations and situations that we, in general, avoid talking about. What differentiates Rohinton from Jhumpa, for me, is the humor and satire that his works possess. Lahiri, on the other hand, stays away from entertaining her audience with these emotions; her work is clouded with melancholy.
Rohinton, I doubt, can finish his work without the tinge of amusing humor and topnotch satire.

“Why did humans do that to their feelings? Whether it was anger or love or sadness, they always tried to put something else forward in its place. And then there were those who pretended their emotions were bigger and grander than anyone else’s. A little annoyance, they acted out like a gigantic rage; where a smile or chuckle would do, they laughed hysterically. Either way, it was dishonest.”
-Rohinton Mistry (A Fine Balance)

The way AFB is structured is worth noting too. Audience is given what is needed when time comes. Neither sooner nor later. On time is the delivery.

What helped in fetching the label of “an unforgettable story” from me are the well-timed unforeseen twist and turns. Remarkable is the word. They hit my core and made me re-think about the unfair world that unfair God has prepared for us to live in, or is it we who turned it into such a world? How does it matter anyway who created it! What matters is that we are here now, living in this world, pretending that we are ok in the most non-ok situations and predicaments.

I am not a huge fan of epilogues, but the one AFB has is as redolent and substantial as any other part of the novel. It provides an apt end to this beautiful journey. Anything more would have spoiled it, anything lesser would have deprived it of the closure it deserved.

The cover reveals its significance in time, and all the puzzling pieces of what the cover has to do with the story fall in respective places.

This book made me cry, sometimes it was the helplessness and the sad world of our characters, and sometimes they were the happy tears. It made me chuckle too. It reminded me to not to perceive people through their looks or what they do for their living. We never know what they have gone through, and sadly, we, mostly, never even bother to care about it either.

If we were as swift and prompt in understanding and offering empathy to people as we are in judging them, world would certainly have been a far better place than what it is today. 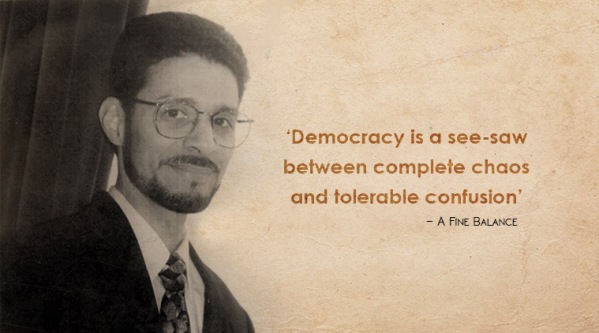 There is this another emotion, which is corrosive in nature and acts as a slow poison, called regret. And it is the one that most of the human beings want to stay away from. So, if you want to avoid the clutches of regret, take my advice, and do read this novel, at least once in your life. Re-read it, if once wasn’t enough. But don’t leave it behind unread. Mind you, again, regret is the destructive of all the feels.

This is one of those books, which has not received as many eyes and hearts as it deserves. And I urge each and every one of you reading this review to read “A Fine Balance”. Of course, if not of your taste, no matter how much I glorify it, none of it would save my review or this book or its author from your backlash; and that is fine too. But if any of the lines of my review speaks to that beating heart of yours, don’t hesitate in picking this novel up.

“Where humans were concerned, the only emotion that made sense was wonder, at their ability to endure; and sorrow, for the hopelessness of it all.”
– Rohinton Mistry (A Fine Balance)

Have you read “A Fine Balance”? How was it for you? Or have you read any other book (by the same author or different) that has had a similar impact on you? Do tell me about it. Isn’t it important to save one another from the gripping shackles of regret? It is. Very much.

IF YOU ARE A FIRST-TIME VISITOR OF MY BLOG, DO REFER ‘First-Timers’. IT WOULD HELP YOU IN EXPLORING THE PLACE.

No credit for the Images used
Copyright © 2018 by Idle Muser. All rights reserved.