Be aware of your own history, before you indulge yourself into others’.

What inspired me to pick up “Freedom at Midnight” is, at the first place, the credibility of the authors that I wouldn’t be fooled around with anything on the name of history; and secondly, of course, my craving to know what made my nation to get into the clutches of the English rule, how did it get out of Britishers’ grip, who made it, at last, an independent India.

Now, did the book answer all my questions? Did it quench my thirst of knowing about the real struggle of India’s freedom? Did I, in the end, feel, ‘Oh! This is how India got its freedom.’? It did not. And still 4 star rating to this book, why?

Firstly, book’s introduction made it pretty clear what I originally wanted to learn from the book, would be delivered not here. I was told that this book is a one-year story, which starts with Lord Mountbatten being appointed as the last Viceroy of India and ends with Gandhi’s assassination. Even the book’s cover – which has faces of Jinnah, Nehru, Mountbatten and Gandhi on it – shouts aloud about the main characters of the book. So, I wasn’t promised one thing and delivered with something else. To sum it up, I wasn’t betrayed. 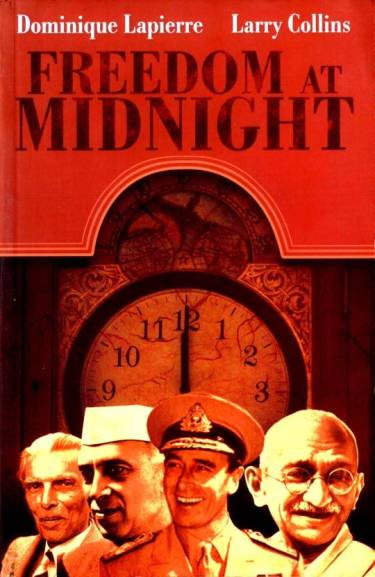 Another reason, and I must say, one of the strong reasons that can enjoy the credit of me loving this book is the writing. Yes, it’s a non-fiction (told in a form of story) and chances are huge that you might lose interest in it, but “Freedom at Midnight” kept me bewitched till its last page.
Technically, the book is flawless. While reading it, you will be able to learn as a reader, as well as a writer. It has something for everybody.

A non-fiction book, especially one like this, needs research, extensive and deep research. Larry and Dominique already hold credibility for being such researchers and the book proves it, yet again. But, were they unbiased? (Larry being an American, well, you can stay 80% unbiased perhaps, but 100%? I doubt.)

For one, when you will finish reading the book, Mountbatten would appear to be a man with clean-chit; I cannot recollect even one incident that put Mountbatten in a shady position. Even Nehru, who has been accused for taking various wrong decisions at that time, would appear to be a man with only righteous principles. But above all, if you are interested in Gandhi’s life, his principles, then you will end up with its massive details and descriptions.

For me, I never detested Mahatma Gandhi; I know of many who did and who still do. Yes, I had my doubts, for his non-violent tactics appeared to be too gentle to make Britishers, people who came as traders, gradually and systematically occupied the whole country, exploited and looted its resources, leave India by just asking them to leave. But, in the end, it was he who could be credited to be able to avoid bloodsheds that could lead to many more massacres. Be it in Bengal or Delhi, be his non-violent methods called too witty or foolish, it was because of him that many other could-be disasters of violence happened to not take place. On an overall look, he was a man of some really tough principles, a bit diplomatic, too strong for his frail and delicate frame. He had his own shares of controversies too, especially the ones in relation to celibacy. But was it Mahatma Gandhi that brought India its freedom? He played a part in it, yes; but it wasn’t only for him that India is free today.

Jinnah has been another of the major characters in the book. He was the one who stood adamantly on his demand of having a nation solely for Muslims. His not budging even for a moment, divided India; the other part namely Pakistan. Quite a revelation it was to me that it was not Jinnah who had sprung the idea of having a Pakistan, but rather a Muslim student, who had proposed the idea.

A crucial part of the book is also dedicated to the Maharajas and Nawabs, their lavish and (some) bizarre lifestyles, who had their own territories in India till British ruled. Some parts of the chapters that deal with them made me nauseous and I couldn’t feel anything but abhorrence.

Kashmir, the apple of the eye of India, had started facing its share of violence that it’d burn in, right after the India’s freedom.

Communal hatred, communal rivalry, communal fights all these led to a staggering and shocking human loss to all the communities- Hindu, Muslim and Sikh, especially after partition, i.e. after the midnight of the India’s freedom. The descriptions of people and their situation while migrating, leaving their lifetime’s wealth, from one nation to another, the stories that the book presents would make you screech, would tear you apart and question the human’s humanity. After partition, there had been houses whose door opened to Pakistan, while the rest of the house laid in India. The partition divided houses; it divided families; turned brothers on their own brothers. As much victorious freedom of India must have felt, it was as saddening and horrifying to millions of people, especially in Punjab. It solely was Punjab’s dissection that led to half of the massacres that horrified not only India but the whole world.

The end of the book deals with the planning and execution of Mahatma Gandhi’s assassination, people like Godse and Apte involved in it, their lives and their principles. It was clear that the extremists could never support Gadhiji’s ideas of non-violence and anti-communal principles. And that was what led to Gandhi’s assassination, those very feelings of betrayal that many people felt on his supporting Muslims.
Such dilemmas are the pickle. You cannot discern the wrong from a right or a right from a wrong. Both were right, perhaps; only situations never were.

This was my first-read on India’s freedom and I’m definitely not taking everything the way it has come to me. Listening to only one side’s story is what leads to misunderstandings, misconceptions, and I, like many others, have been their victim for so long that it seems like a lifetime. But now I want to know the real history, the one that I should know, not the one that others want me to know.

Have you read “Freedom at Midnight”? How was it for you? Do you know of any other major reads that gives a better and unbiased picture of India and its freedom?

IF YOU ARE A FIRST-TIME VISITOR OF MY BLOG, DO REFER ‘First-Timers’. IT WOULD HELP YOU IN EXPLORING THE PLACE.