DISCLAIMER- This is a piece of fiction. Please don’t confuse Aashka with Aditi (Idle Muser).

Be it an anniversary or any other occasion, the day that I look forward the most throughout the year is my birthday. And I don’t think that I will ever care of how old I get with my every passing birthday; even after fifty years when I (hopefully) would be celebrating my seventieth birthday, I’d not mind rejoicing that day.
Getting old is inevitable; what is evitable is not being sad about the fact and instead appreciate the life that you’ve been able to live with your loved ones.

This was the note I, Aashka, found in my grandma’s drawer. This, of course, wasn’t meant for me as my name wasn’t written at the top of that old, yellow-turned piece of paper. For whom it was, I don’t know, but I loved my grandma’s vigor- the positive vibes this letter sent through me were much-needed, for my birthday was only an hour away, on 3rd July. Only to-be 23 and I already was feeling old.

After I finished reading that note dated back in mid-1900’s, I kept it back in where I had taken it from and went to my room. I was enthralled- not because of the note anymore but because of the birthday wishes I was to receive as clock was about to strike twelve.

My room’s clock was ticking properly, I checked; my phone was working, I double-checked. All was good and just after ten minutes my phone would start ringing and buzzing with messages.

As I had been living on my own for a while now, in my grandparent’s home, away from my family because of work, I didn’t expect my parents and my brother, Jay, to surprise me in the morning by being at the door, but a little part of me held on to the hope tightly. In case I shatter your hopes later, I’d like to unveil to you that it, my family, wasn’t there when I woke up. Delhi isn’t next to Hyderabad, after all.

And it was twelve. And then soon ten minutes past twelve. I hadn’t received a single call and I knew it was the damn network that was playing its tricks again. So, I went to the other room in the hope of catching any of the network signals that I might. Hope, I had come to realize was a pretty good thing to hold onto. Here, I got into the other room, there, my phone started ringing. I knew it was the damn network.

Receiving those midnight birthday wishes was great. Almost all the expected ones did wish me except a few. And I hoped those few had some good reasons for not doing so.

Before dozing off, I checked my Facebook account. ‘Already twenty wishes in an hour. Not a bad start’, I thought.

The morning, day of 3rd July, had brought a special treat for me- a sky covered with black clouds; nobody would ever realize how fortunate one would feel with no sun unless he or she has lived in Delhi. It’s like raining in Sahara desert- this isn’t an overstatement. Trust me!

I went to work, in my casual clothes nothing fancy, not that I didn’t want to but it was saved for my evening. My colleagues wished me the moment I reached. My boss, a stout man in his mid-fifties, didn’t. ‘He isn’t on Facebook’, I reminded myself.

By the time I reached back my home, at six in the evening, my Facebook wall was full of wishes and the inbox full of messages. Wishes on call were ongoing too. My relatives- paternal and maternal- had wished me.

Now was the time to throw that grand party in Social Pub. Meeting time was eight. So, I got ready and by seven I was wrapped in my special-birthday dress which I had bought months ago. Who wants to risk it till the end? What if you don’t get the right size in the end? What if the right color isn’t available? Anyhow, after getting dressed, I called up the cab and went to the Pub, where everybody was waiting.

I already had got almost 250 birthday wishes on Facebook by then. For a person who only has 500 friends on Facebook, the figures weren’t disappointing. Anyway, four hours were still left.

We got drunk (I got only little tipsy), we danced (I danced the most), we enjoyed and just like that I happened to have celebrated my 23rd birthday. The moment I had stopped dancing, I felt my wet face and realized my eyes weren’t dry. ‘I probably am imagining stuff’, I thought. ‘Being high has its own perils.’ But no, I wasn’t that high. I went to restroom and saw my smudged mascara. 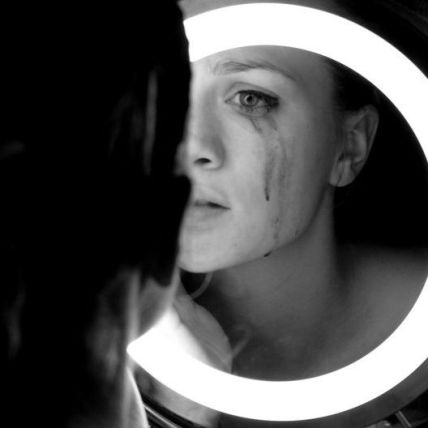 ‘What’s wrong with me? Why the hell would I cry while enjoying?’ Those certainly weren’t happy tears. Tears of sadness? But how possibly could I be sad while I was dancing?

Clock had struck eleven and I was thrown into puzzlement. After half an hour or so, I was back at my home freshening up- clearing my smudged eye-makeup and dabbing the rest of my face. While I was in washroom, I heard a rattling sound from somewhere. Hairs of the back of my neck stood at their end and my body froze. ‘Is there somebody else too here?’ Panic-attack could have struck me anytime then. I latched the bathroom’s door and kept on staring at it. After a while I heard murmurs in the dead silence of night that scared the hell out of me.

My mobile was in kitchen; landline was in living room. Any help could be sought for only after getting out of bathroom. But the recent cases of burglary in neighborhoods had thrown me in my paranoia. I had a feeling that the moment I step out of bathroom, I’d be stabbed to death.

Quite some time passed and I, mustering all my courage, unlatched the door as quietly as possible. Stealthily, I, my hand clutching a razor, which was all I could find in bathroom, came out. My shivering hands, full of sweat, had become so slippery that even the razor’s rubber-grip didn’t stay steady. To my slight relief, I wasn’t stabbed as yet. Without wasting any other minute, I took out the pepper-spray from my sling- all this was done in great silence. Now, I was equipped with two weapons.

Shaking with trepidation, I proceeded towards room’s door. I didn’t want my birthday and death-day to be the same. I didn’t want to die at such a young age; I had to have to talk to my family, at least, for the last time if that was to be the end of my life.

But before I could even step out of the room, a group of people attacked me with birthday song. Damn! I was only a centimeter away from dying of a sudden heart-attack.

Mom, dad, Jay and grandma in birthday caps and a birthday cake in hand were standing in front of me. This time, I could feel tears coming out of my eyes. Those were the happy tears. And in that moment I realized what those tears in the pub were for.

There are times when you miss some people so much that the feeling of missing them engrosses you without even making you realize it. You live with that ‘missing’ feeling without even realizing it.

‘How did your birthday go, beta?’ My grandma asked me after out little family reunion. ‘Who all wished you?’

Grandma, my family wished me, was all I could say and hugged her. You were right grandma; I should celebrate my life that I’ve been able to live with my loved ones, I mumbled.

‘So Aashka, more than 300 wishes on Facebook. Right? 100 more than last year.’ Jay winked at me while eating cake.

And yes, I told you guys my family wasn’t there at my door in the morning. But there was no mention of the night. Right?

PS- In case you wanted a glimpse of somebody’s 22nd, here it is- 22nd and Wiser!