It was love at first sight, for me. It was one-sided love too, from my end. You don’t happen to believe in something like this, unless you experience it.

One-sided love- this never was a concept I didn’t believe in- I knew of its existence and so never wanted to experience it either. But life never allows everything to be fair; for if it did, what meaning would life be left with?

Just the most uncommon additional fact I’d like to share with you before opening up about my tragic love story- love at first sight is a bliss; one-sided love kills.

The day was ordinary: getting ready for office, reaching (late to) office, scratching my head with previous day’s pending work, and feeling paralyzed with the present day’s new commitments. The only extra-ordinary thing (extra-ordinary because if that walk hadn’t had happened, I wouldn’t had seen him) that I probably did was having a walk in the park nearby my office after lunch. One of my friends accompanied me for a few minutes, but her legs demanded of her to offer them rest, and she agreed to have their commands be her wish. I, after a long time, wanted to keep on walking, doing nothing, thinking about nothing (my office wouldn’t shut down with my absence of an hour or two) and so I kept on walking.

The park being almost empty and still, I wasn’t expecting any chance of encountering any known face. Also, not all the people are brave enough, like me, to shudder off the idea of being kicked out of the office for taking a lunch break of as long as two hours.

Clouds, favoring me, covered every nook-and-corner from where sun’s rays could hamper the mildness of that day’s weather. They say you fall in love when least expected; the day I was over-burdened with office work would have been the last day to think of a feeling as love.

He was sitting in one end of the park, minding his own business, when I noticed him for the first time. Never in my life had I seen someone so handsome, so charming, so dreadfully adorable. The moment I saw him, I knew this is what my life had been missing, this is what love is, and I just gave myself up to him right at that moment.

For a few minutes, I kept on debating myself whether to approach him or not- would I look desperate if I make the first move? Would it make me look like a bit too easy girl? What if he is already taken? Swirling questions in my mind made me swirl on my steady feet for a moment, but I managed to reach at my final decision. I’d go to him.

The moment I started to move in his direction, he looked at me. “Oh those eyes!” I thought. Could there be more mesmerizing eyes than those in the world?
When I was complimenting every bit of him, he probably was thinking of me as a hopeless case. You might ask why! Well, when I was only a few meters away from him, he stood up, gave me a wary glance, and went away. Yes, he went away, ignoring every bit and piece of me.

I felt bad for a moment or two. But then I cheered myself up, as optimistic as I try to be, by determining of coming back to park the next day, again (hoping he would come too,) and talk to him. If today’s scene wasn’t enough to make me seem desperate, my optimistic-side made sure that the next day would do the job.

There I was- in the park- yet again. This time I went alone unlike last day. I looked for him at the same place and found him in the same position: sitting and having his meal. Nobody was around and I hoped even if he declined to talk to me, by walking away, again, like last day, there wouldn’t be anybody other than two of us to witness my embarrassment, unless he bragged about it to any of his friends.

So, I started moving towards his place. This time, I walked with more sophistication, unlike my natural haphazard walk, to look more like a girl and lesser like a tomboy. Yes, you guessed it right, he got up (I wished he’d approach me) and walked away.

I’d have called him back by his name but, unfortunately, I was only a desperate girl who was on the way to becoming his stalker. After being smitten by his love bug, there wasn’t a moment when I could get him off my head. And so, my seldom walks turned into daily walks.

Well, two weeks had passed and I still was only his stalker, who didn’t even know his name. But what happened that day wretched me.

When, after the efforts of two weeks, I again was going to try my luck on befriending him, I saw a girl sitting beside him. She seemed to be of my age, and it didn’t take me a second to think of them not being in love. I hid behind a tree and noticed them from far away. When I saw him- wagging his tail vigorously, licking her face, playing with her, fetching ball for her- my heart sank; their merry sight broke my heart. 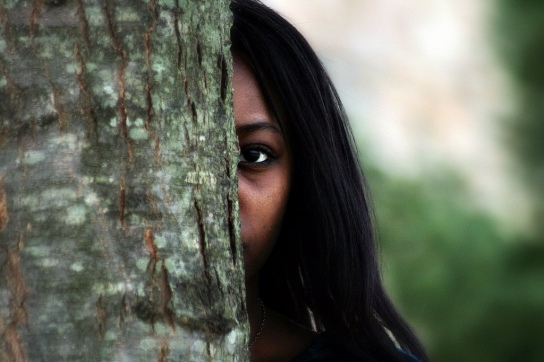 He was already taken. With my disappointed face and heavy heart I turned around and started heading out of the park when I heard her voice, “Hachi! Come. Time to go.”

And this is how my love story ended before even embarking upon its journey.