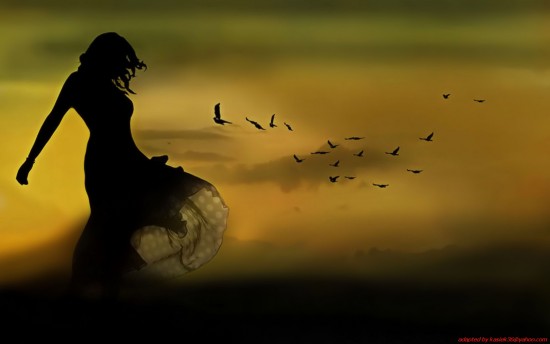 DISCLAIMER – I urge you to go through PART-1, if you haven’t, before you proceed with PART-2.

You don’t realize how daunting your past can be if those memories and their recollection don’t haunt you with your every breath, with every movement of yours. I, Scarlet, am the victim of such past, a past that relives itself every morning when I wake up. When Jay was leaving today, I could see his shadow following him, but my shadow-it abandoned me that night.

Krystal doesn’t know about us. What is even there to know though?-that I am his mistress, that this innocent-looking twenty-four years old is his mistress. I never felt ashamed of being one because all my life I’ve been robbed off of things that belonged to me. Everything. She, Krystal, deserves this.

Hours had passed since he left for office and I still couldn’t gather the courage to call her and tell her that she lost, that she finally had lost it all. But did I win either? Her number was on my speed-dial; it always had been. How could I not have my elder sister’s number on speed-dial!

I know what had happened that night. I know about Krystal and Vikram. Vikram was the one whom I had loved and she took him away, too, from me, like everything else. I was smart too but all mom and dad used to notice was Krystal’s smartness; I was pretty too but it always was Krys to have been receiving those compliments. I had gone through a time in my life when I’d spend weeks without looking into mirror. My body trembles even now when I think of those times. But the night she stole Vikram from me, that was the night when I had decided that I’d get back on her the same way. So, the day she got married to Jay, which was only a month after that night, I knew what I had to do.

But things didn’t go exactly the way I had planned. Enticing Jay was only my way of getting back on to Krystal; never in my dreams I had thought of falling in love with him and on the top of that carrying his child in me. And now when Jay was gone too I didn’t know if I did win either!
**********************************
“I must inform her about my flight’s reschedule-it is an hour early”, I thought. But the second my finger was about to hit that green button, I lived a moment of remorse. What have I been doing to myself? To her? To my son? I don’t want my son to remember me as a fraud who cheated on his own family.

I spent a few minutes contemplating my decisions and found myself in dirty mire.

I got to call her. I got to tell her that I love her. On dialing her number I reached to her voice mailbox, which I knew she didn’t check too often. “I can wait for some more time”, I whispered to myself.
**********************************
It’s been four years since I have talked to my sister, or shall I call her a mistress? Of course, I know.
I stayed silent four years back only because my little sister loved Vikram. Having to hear anything against him would have killed her; I had seen love for him in her eyes and I’d have been the last person on earth to even think of hurting her. Even if that happiness is on my expense.
I always had taken care of Scarlet not as a sister but as a mother after our parents’ demise in that car accident. We had only each other and even after doting on her, what I always received was her rebuke.

My head was pounding with pain and its only cure was to confront Scarlet. Jay was about to reach too and before he could reach here I needed to talk to her.

After a few rings, she did pick up her phone. Her voice hadn’t changed.

“It’s me.” My words wanted to rip her heart off of her chest, but this was all I could blurt out.

“I know, Krystal.” Agitation that should have been in my voice, I sensed in hers.

“You are cheating on me with my husband!” I hollered. My hands were trembling and sweat started forming its bead on my forehead. “Don’t you have any conscience, Scarlet? What I could have never thought of doing with even my enemy with, you did it to your sister and now….”

Before I could complete she asked me what I was talking about, that it was I who wronged her four years back. Instead of being sorry, she was shouting back at me.

“What the hell are you saying, Scarlet? You’re blaming me for getting raped?” I had no choice but to roar back at her.

“Rape?” The horror-stricken voice of hers made me believe her for a second; that she doesn’t know about that night. Of course she knew, I saw her while I was being forced in that room. She continued, “You and my boyfriend (Vikram) made out and you calling it a rape?!”

I tried to answer her but she didn’t want to listen.

“I saw you both entering into your room. You both were drunk and he had his arm around your waist; yours was in his. Just when I was about to call your names, the door shut. Yes, Krystal, it did shut in front of me. Your sister witnessed you cheating on her with her boyfriend.”

I could feel my heart being shredded. My mind was numb and I didn’t know what I should say, or if I should even say anything. “Scarlet, I know you were there and it was I who was drunk not Vikram. I might had not been in my complete senses but I could still differentiate an innocent touch with the one made otherwise; and that night was full of latter ones. I even waved you but you didn’t come to my rescue.” I didn’t even realize but I was already in tears. “I was raped, Scarlet. And that too in the presence of my sister. You did let that happen, Scarlet.”

She stayed silent. Her silence tore me apart.

“And do you know that Om isn’t Jay’s child? Om was conceived that horrendous night and Jay still doesn’t know about it. I-I-” This was the most I could say before bursting out in tears. I hung up on her.

Doorbell rang. I cleaned myself up and cleared all the signs of distress that could have lingered over around after my talk to Scarlet. He was early than he was supposed to be. His face was pale too.

“I have a confession to make.” He said without even entering into the house. “I and Scarlet are…from past two years. I’m sorry!”

I turned my back to him. Who was supposed to apologize? Who was supposed to forgive? I, or Scarlet, or Jay? Do we even know each other? We all had held our dark secrets within us for so long that now with every revelation our worlds would turn upside down.

IF YOU ARE A FIRST- TIME VISITOR OF MY BLOG, DO REFER ‘First-Timers‘. IT WOULD HELP YOU IN EXPLORING THE PLACE.